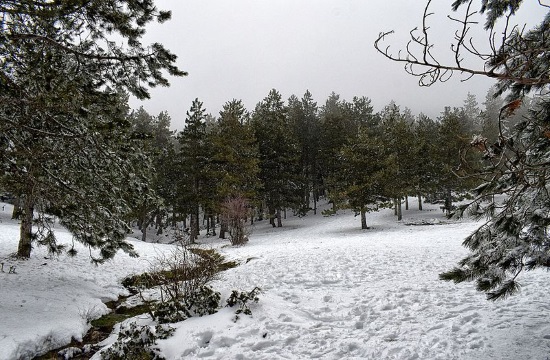 A recent incident in which a wolf approached a man and his daughter and attacked their dog on Mt. Parnitha just outside of Athens on Saturday shocked many Greeks all across the country, according to greekreporter.com.

Most residents of the Greek capital certainly had no idea whatsoever that wolves roamed the mountainous slopes situated so close to the metropolis.

The Greek wildlife protection organization Callisto, which is dedicated to conserving the country’s native wolf populations, announced after the incident that at least 25 wolves live in the area spanning from central Greece to the mountainous outskirts of Athens, but the actual number may be higher.

This is an increase compared to past years when wolf populations outside of Athens struggled. It is believed that a recent surge in the numbers of local deer, which occurred after a massive forest fire razed much of Mt. Parnitha in 2007, led to a rise in the wolf population.

“Wolf sightings on Mt. Parnitha are not new, as we have other recorded incidents in the past. The problem is that, since Mt. Parnitha is very close to Athens…many nature lovers and hikers leave food for wild animals there, thinking that they are feeding and helping them. This is a very bad practice, as it can cause dependence amongst wild animals,” Giorgos Mertzanis, the head of Callisto, stated to ProtoThema.

This can also lead to more frequent contact between people and wild animals, which is always to be avoided if possible.

“We have seen hybridism in stray dogs that have mixed with wolves, and these dogs have taken on the behavior of wolves despite the fact that they are not completely wolves in genetic terms. As many look like average stray dogs, they may seem familiar and tame to people,” but they can be dangerous, Mertzanis underlined.

While the attack was tragic, as the father and his daughter lost their beloved dog, taking pets has been banned on Mt. Parnitha since 1985.

“This rule needs to be understood by all visitors…Unfortunately, we have an inclination not to apply the rules. There are no visible signs to inform people of the rule…Caution is necessary even though such attacks are very rare,” Mertzanis pointed out.

Callisto was founded in 2004 by a group of scientists dedicated to preserving and protecting Greek nature and wildlife. The organization’s main goals are studying, protecting, and managing “the populations and habitats of large carnivores, bears and wolves and other endangered species of wildlife.”

They also hope to “improve the coexistence of man and wildlife,” which includes educating the public on Greek wildlife, and how to act in situations like the one faced by the man and his daughter recently.

Callisto brings awareness to environmental issues in Greece, especially those which impact the country’s large carnivores, like bears and wolves.

The organization’s scientists monitor the populations of these carnivores in Greece and help to preserve their habitat by advocating against major human interventions, such as real estate developments, on land inhabited by the animals.

Callisto also has a “Bear Emergency Team” that “intervenes whenever a wild animal is in danger (cases of trafficking, poaching, etc.)” and in the case of interactions between these animals and humans.