Vaccines could be less effective against a new COVID variant that UK scientists are “deeply concerned” about, says the health secretary.

Sajid Javid said B.1.1.529 could also be more transmissible and has banned travel from six African countries as a precaution.

Here’s what we know so far.

How concerning is the variant?

It has 32 spike protein mutations, which means the current crop of vaccines may not be as effective at providing protection.

Spike proteins are what viruses use to get into human cells, and some of the vaccines work by training the body to recognise the spikes and neutralise them.

Mutations on the spike can therefore potentially prove problematic.

‘Our scientists are deeply concerned’ – Javid

Sajid Javid said it has “perhaps double the number of mutations that we have seen in the Delta variant”.

Another expert, Tulio de Oliveira, from the Network for Genomic Surveillance in South Africa, agreed that the “constellation” of mutations is a “concern for predicted immune evasion and transmissibility”.

It’s unclear at the moment whether the variant may cause more severe disease.

Epidemiologist Professor Neil Ferguson said B.1.1.529 is concerning but there is not yet an “evidence-based assessment of the risk” – such as to what extent it may cause a problem for vaccines.

Have any cases been found in the UK?

No – the good news is that only a handful have been detected across the globe and Dr Peacock emphasised cases are currently “super low”.

So far, three have been found in Botswana, 53 in South Africa and one in Hong Kong – from someone who had travelled from South Africa. 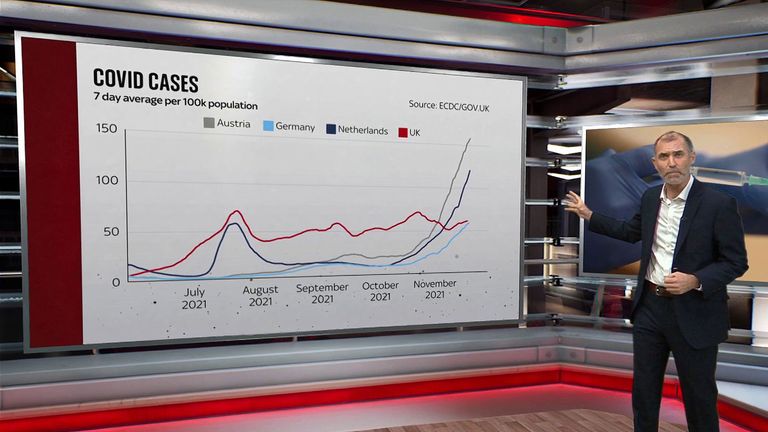 Why isn’t UK having COVID surge like in Europe?

Scientists are therefore hopeful it can be contained and the UK has acted early to try to stop any potential spread.

As well as banning travel from six countries – South Africa, Namibia, Lesotho, Botswana, Eswatini and Zimbabwe – people who’ve arrived from there in the last 10 days are being asked to get a PCR test.

It’s important to note that it’s normal for viruses to mutate, and often they can just die out.

How was the variant discovered?

It was found amid a rapid increase in COVID cases in South Africa in the past week.

They increased to more than 1,200 per day on Wednesday and 2,465 on Thursday, having previously been just over 200 per day.

Scientists examined the genomic sequencing of these new cases and discovered the variant.

Importantly, they are now looking at what percentage of this surge is the new B.1.1.529 variant.

Experts from seven South Africa universities are studying it and have 100 whole genomes. They also say the variant shows up using a PCR test.

What is the World Health Organisation saying?

It classed it among one of its eight variants under monitoring (VUM) on Wednesday, indicating it may pose a future risk.

Its technical working group is meeting again on Friday to discuss the latest.

The WHO may decide to upgrade it a variant of concern (VOC) – on par with established variants like Delta, meaning it has “global public health significance” – and issue guidance to member countries.

It may also classify it a less serious variant of interest (VOI), which indicates for example that it may affect transmissibility or disease severity.