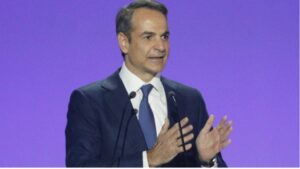 “We are the New Democracy of all Greeks and all of Greece,” said Kyriakos Mitsotakis, beginning his speech at the ND Convention.

In his speech, the Prime Minister gave an extensive account of the 3 years of government term and what the government has achieved. He also referred to the program statements to emphasise that “despite repeated crises, we are consistently implementing our government commitments.” Mitsotakis also made extensive references to various policy areas and the changes made by the New Democracy government.

From the work card to the reduction of contributions, the increases in pensions from the beginning of the year, to the personal doctor and the big projects that are launched in the various areas.

The Prime Minister stated that the Convention is taking place in times of great uncertainty. “The war in Ukraine overturned everything we knew. It is making international developments uncharted”, he mentioned characteristically. “The middle class can not pay the price of the global energy crisis. We have the courage to correct this injustice.”

PM Mitsotakis at EP Plenary: “Greece will not tolerate any disputation of its sovereignty and territorial integrity” (video)

Direct threats against Greece from Turkish FM Cavusoglu: “We are not bluffing!”