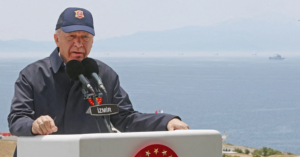 President Recep Tayyip Erdogan has kicked off Turkey’s campaign season by confirming that elections will be held next June — and that he will seek to extend his rule into a third decade. “Now, I am saying that I am the candidate of the People’s Alliance,” he told supporters in the Aegean port city of Izmir last week. He was referring to the ruling coalition of his AK Party and the nationalist MHP.

Turkey’s allies and rivals, along with Turks themselves, might want to buckle up for 12 months of turbulence. The US and Europe should brace themselves for even more mudslinging and contrariness from Erdogan at a time when they need his cooperation in containing Russian adventurism.

Ornery in the best of times, Erdogan has grown even more quarrelsome with the West as he has become politically vulnerable at home. His fortunes are now at their lowest ebb since he first took the reins in Ankara in 2003. He and his party have slipped in opinion polls over the past couple of years, as Turkey’s economy has been hammered by a combination of the pandemic and the president’s economic policies.

Although the lira has tanked and inflation has soared, Erdogan has stubbornly resisted calls to raise interest rates. “Turkey is again stuck in a vicious cycle. High inflation causes the lira to weaken, which results in even higher inflation” said Ziad Daoud, chief emerging markets economist at Bloomberg Economics. “Lifting interest rates would break this cycle, but that’s unlikely to happen.”

Brexit: How it will affect thousands of Greeks living and working in the UK

Mitsotakis: We have an unpredictable neighbor, it is time for a national rally

US Ambassador to Greece: “US is ready to sell F-35 jets to Greece”