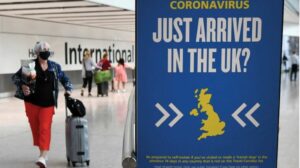 The British government is expected to roll out its latest, revised plan tomorrow for travel abroad, and the list of orange countries, including Greece, according to reports. Fully vaccinated Britons are expected to be exempted from quarantine upon their return to the country.

Secretary of State for Transport Grant Shapps is expected to announce the new rules for the orange countries, which are also considered the most popular holiday travel destinations. Apart from Greece, Spain, Portugal, Italy, and France are also expected to include in the updated list.

However, representatives of the tourism industry are calling for a clear date on the new rules. The Minister of Health told the deputies last night that the holidays of the fully vaccinated will be allowed “very soon”.

The plan for travel to the orange countries is based on the reciprocal approach of European countries that allow British tourists to enter without quarantine.

The Greek tourism sector, which has been hit hard by the pandemic, sees the decision as crucial as the tourist season is nearing its climax. However, although the government insisted that at some point the trips will open, PM Boris Johnson did not give a specific date last night, as he limited himself to referring back to Shapps.

Explore the “Lovers’ Cave” half an hour from Athens (video)