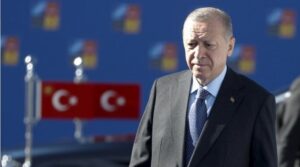 The Turkish president Recep Erdogan accused Greece of 147 air violations of Turkish airspace and explained that the Turkish air force will respond, making it clear that he is not considering any meetings with Greek PM Kyriakos Mitsotakis although, as he said, many leaders made an effort to reconcile them.
“Turkey does not want to go to war with Greece but will continue to respond to “violations” of Turkish airspace”, Recep Tayyip Erdogan said, a day after returning from the NATO Summit in Madrid.

The Turkish president, in his statements after the Friday prayer in Constantinople, was asked about Greek-Turkish relations and the possibility of easing tensions, after the statements of Kyriakos Mitsotakis in favour of Turkey on the issue of terrorism. As he said, he is not thinking of any meeting with the Greek prime minister, although as he said, many leaders made an effort to “reconcile” them in Madrid.

In the same context, he accused Greece of “violations”. “They committed 147 air violations in a very short period of time. So, if we are neighbours, if we are friends if we want to live in peace, why are you violating our airspace 147 times? Of course, when you commit such violations, then what is our duty? Our air force will also mobilise and give you what you need. This is what our air force does,” he said.

Is Joe Biden getting too old to run for a new term? (infographic)

How the Greek revolution made the modern world – Analysis

UNESCO slams Turkey over conversion of Hagia Sophia into mosque