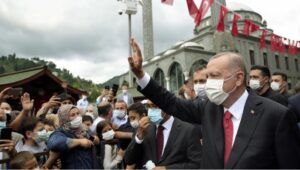 A member of the central committee of Erdogan’s AKP party in Turkey openly threatened Greece that the army could march to Thessaloniki in only 5 hours during a speech.

According to a report aired on Skai TV, the Turkish politician, who was implicated in a recent sex scandal by a mobster of giving him $ 10,000 a month, unleashed his war threats against Greece stating in a speech: “Foreigners want to get Greece to launch missiles against Turkey. We challenge them. Greece says it will launch missiles. Let’s see what happens. In 5 hours we will be in Thessaloniki. In 5 hours we will be in Athens. Whatever they do. Do not forget, the old Turkey no longer exists!”

Earlier, government spokesman Omer Celik again accused Greece on the immigration front and the European Union of being indifferent.

“Greek forces are pushing and puncturing the boats of immigrants. They are leading defenceless people to death. All this is happening in front of the eyes of NATO forces. Without the Turkish Coast Guard, these people would die,” Celik said provocatively. In his attempt to vilify Greece, Celik also claimed that “the world must stop this immoral cruelty. Greek forces are trying to kill defenseless people. They handcuff people and let them die,” he said, reiterating the well-known allegations made by Turkish propaganda.

Greece: New restrictions for the unvaccinated from today

Rains and thunderstorms forecast for next days

Greek FM: I have not seen tangible evidence of a change in Turkey’s behavior