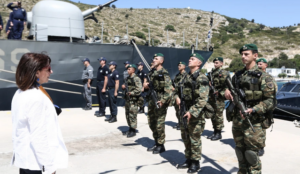 New delusional provocations against Greece by the Turkish opposition newspaper Sozcu, which now denounces the President of the Republic Katerina Sakellaropoulou, for visiting islands that -according to the newspaper- are under…”Greek occupation”.

“The Greek President was welcomed with a military ceremony in the port of Gavdos, while she herself greeted the Greek flag carried by Greek soldiers on the island. The President was accompanied by two priests appointed by the Greek Patriarchate of Constantinople in Gavdos”, he said. 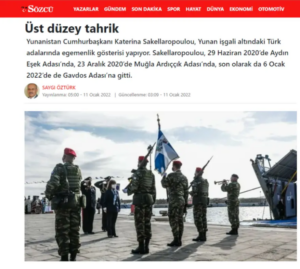 The Turkish journalist quotes a statement by the Turkish former Secretary General of the Ministry of Defense, retired officer and geopolitical-military analyst, Yumit Yalim, one of the leading figures in Turkey advocating the change of the status quo in the Aegean and the Eastern Mediterranean, who recently claimed that Greece is “stealing” Turkish oil in Thassos. Yalim recalled that in 1996 a Turkish admiral had prevented a Greek exercise in the area of ​​Gavdos.

“The island of Gavdos, which is one of the 20 Turkish islands occupied by Greece, is of strategic importance”, he added.

Soscu is an opposition Kemalist newspaper, with incendiary articles against Greece.

Israel joins US, UK and EU in condemning Turkish provocations in Cyprus

Time: How Erdogan’s increasingly erratic rule in Turkey presents a risk to the world – Analysis

Journalist’s testimony: Two Greek-Cypriot soldiers buried in the yard of a house in Varosia