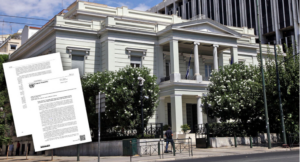 Greece gives a new response to the illegal Turkish-Libyan memorandum signed on October 3 with a letter sent to the UN on November 17, in which Ambassador Maria Theophili describes the Greek positions and explains why the text signed by Turkey and the interim government of Libya does not produces legal effects.

The Greek side also points out that the Turkish-Libyan memorandum of October may have consequences for regional stability in the Mediterranean “peace and security in the region”.

The letter explains that the mission of the Libyan Interim Government under the 2020 Roadmap is not to review new or previous agreements or decisions in a way that harms the stability of the Libyan state’s external relations or imposes long-term obligations on it. Therefore, a cooperation agreement in the field of hydrocarbons clearly falls within the scope of agreements which the executive authority is prevented from entering into, the letter to the UN Secretary-General points out.

The text added that Greece would like to underline that any action to implement the Memorandum signed on October 3, 2022, which violates Greece’s sovereign rights, constitutes a violation of international law and a deliberate escalation that undermines stability in the region.

In the letter, finally, Athens undertakes the commitment to the peaceful resolution of any issue concerning the demarcation of maritime zones with neighboring countries of the Eastern Mediterranean by peaceful means, in good faith and in accordance with the Law of the Sea.

Fusion power is “approaching” reality thanks to a magnetic field breakthrough 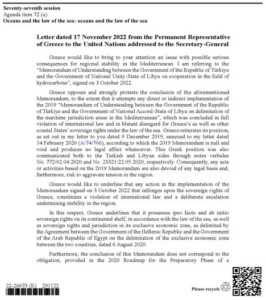 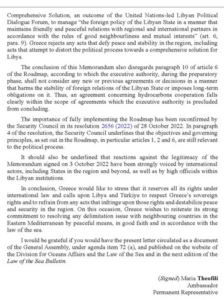