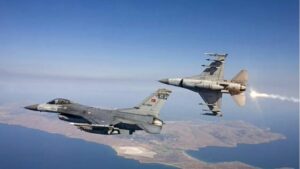 Specifically, two pairs of Turkish F-16s, which entered the Athens FIR without permission, violated the national airspace and flew, at 10:57, over Oinousses and Panagia.

PM Mitsotakis: Gas exploration in Greece possible before the end of 2023

Snow in Attica, Evia, Cyclades and Crete until Wednesday morning

Your best Greek vacation ever

Greek government: Recent snowfall one of the most severe in the last 40 years in Greece