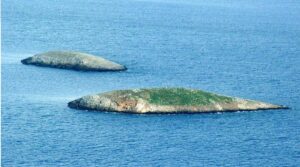 Turkish fighter jets committed 126 violations over Greek airspace on Wednesday the worst day yet for some time. The Turkish airforce flew over more than 13 islands in the Aegean Sea.

The egregious actions occurred the day Greece summoned the Turkish Ambassador to protest against the violations, while the invitation to Turkey to participate in the NATO exercise was cancelled.
Among the violations were the 30 overflights recorded by Turkish aircraft of twelve Greek islands.

The Secretary-General of the Ministry of Foreign Affairs underlined that these actions are a violation of Greek sovereignty, constitute an unacceptable challenge, and are contrary to fundamental principles of International Law.

Ankara’s choice to carry out daily massive violations of Greek airspace and overflights over inhabited Greek islands raises concerns in the leadership of the Ministries of Foreign Affairs and National Defence. This prompted the Ministry of Defence to decide to cancel the invitation to Turkey to participate in the “NATO Tiger Meet” exercise.