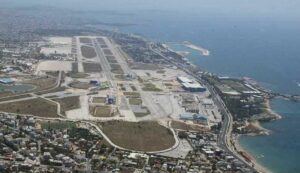 In a feature piece about initiatives by European and Asian cities, and in the context of recommending locations for leisure travel, a CNN Travel publication makes special reference to Greece.

The article covers Greece, under the title ” Spectacular Greek projects “, writing about the Corinth Canal and the Hellinikon International Airport in Athens.

About the Corinth Canal, CNN Travel reports that it was built in Greece in the 19th century, it was one of the most important infrastructure projects the world had ever seen and the realisation of a 2,500-year-old vision. “There are now plans for a new museum on the site in 2024.”

Referring to the work going on at the Hellinikon, CNN Travel points out that it was a busy gateway to Greece, with visitors from all over the world during the heyday of the airliner.

“It’s been empty for almost two decades, but now it’s about to get a new life as a huge 600-acre coastal park, filled with sports fields, restaurants, and open-air theatres,” the American network points out.

Visit Greece’s own Fjords – Where are they?

What to pack for your Autumn holidays in Greece

Telegraph: Greek Cruise in the 34 top adventures for 2021