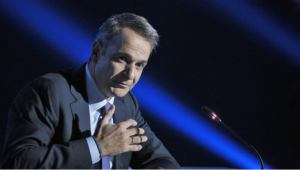 The Prime Minister, Kyriakos Mitsotakis, give answers for everyone and everything in the press conference that started at 13:00.

The interview follows the measures announced by Mr. Mitsotakis on Saturday afternoon during his speech at Vellideio at the 85th TIF.

The Prime Minister referred to the recent reshuffle, referring to purely political issues, saying that the core of the government remained unchanged because he was satisfied.

“I made a move with two characteristics. First, in the field of Civil Protection, there is no ideological sign and I considered that it would be an opportunity to propose this ministry to a person who had these operational capabilities”, he said, referring to Evangelos Apostolakis. You know the continuation, he said and went on to say that he would like to stay in the selection of Mr. Stylianidis who said that he has vast experience in the field in the European Union. He stressed that “I have exhausted my willingness to be consensual with people who have no disposition for consensus”, said Mr. Mitsotakis, adding that he has no intention for early elections.

The country will not close again, economic activity will not be limited

Answering a relevant question, which concerned the uncertainty due to the pandemic for the coming months and whether it will affect the measures announced by the Prime Minister, he said that he feels very safe with the forecast for 5.9% for 2021, characterizing it as the minimum which the Greek economy could achieve.

Speaking about the measures he announced, he noted that the government’s policy is to create wealth and distribute it to all Greeks. “We are not finished with the pandemic, there are stages of uncertainty”, said the Prime Minister, noting that the country will not close again as whatever happens there will be no restriction of economic activity. Speaking about vaccination, he said that non-vaccinated put their lives in danger, as it is 12 times more dangerous to lose one’s life if one has not been vaccinated. At the same time, he noted that all doctors will be recruited in order to convince as many citizens as possible.

USA: The Church of St. Nicholas was illuminated 20 years after the 9/11 attacks (videos--s)

We have boosted disposable income, we are boosting it even more

Speaking about the upcoming wave of price increases, the Prime Minister said that it is imported and said that all countries are facing it. “In Greece, inflation was 1.9% in August”, he said, adding that in Greece, in order to deal with it, the government has so far boosted disposable income and with the measures it has announced it will be boosted even more. He spoke of strict market controls in order to identify violations of competition law.

Tomorrow, as the Minister of Energy said, he will specify the measures related to the price increases that may occur in electricity.

Speaking about the fires, he said that he apologized for the result. “Although we tried very hard we did not manage to protect the environment as much as we would like, so we will change what we can. The apology must lead to tangible results”, said Mr. Mitsotakis while commenting on the polls he said that the government after two years is still leading with double-digit percentages.

“Every difficulty is an occasion for me to become better”. He stressed that when dissatisfaction is recorded, the government is obliged to listen to society. “If there is a reasonable dissatisfaction somewhere”, he pointed out, “we must take it seriously, see what we have done wrong, do our self-criticism and improve”.