A white, hermetically sealed door, which is secured with an electronic lock, is encountered by visitors to the British Museum who attempt to admire the Parthenon Sculptures. The Sculpture Hall, like five other rooms with Greek exhibits, remains unexplainedly closed for ten months, intensifying fears of the international lobby for the return of the Sculptures that damage to the Museum's glass roof, resulting in dripping water next to it ( !) in the Marbles, have not been repaired. , is still not accessible to the public, unlike the other rooms that have been open since last May, when the last lockdown in Britain ended. And this, despite the assurances of those in charge at the beginning of the summer that “the” Greek “halls will open soon”. A representative of the Museum who spoke to “NEA” was not able to give specific answers, generally talking about a “repair and maintenance program” that is being prepared in his rooms. As for when they will reopen? At some point “later in the fall”…

In total, six rooms with ancient Greek exhibits remain closed: the rooms 16), 19), 17 and 18 (s.s. in the latter the Sculptures are exhibited), the which do not work due to “repairs”, and the rooms 18 and 20, which do not receive visitors due to “compliance with the measures for the coronavirus”. It is surprising that the employees of the Museum, when asked, give different versions both for the reason that it is closed, since December 2019, the “Greek” rooms, as well as when they will reopen. “TA NEA” asked four members of the Museum staff who have the authority to answer questions from the public, and received four different answers! “We do not know exactly when they will open. Maybe in a month. Do you live in London? “If so, come back soon or call us,” the first employee told us. Why are the rooms closed? Because of the leak in the roof, I asked her. “Yes, and also for general maintenance.” “We hope that the rooms will be open by the end of the year,” said the second Museum employee we asked, admitting that what keeps them closed is a water leak. “You know, the building is old,” he justified. A third employee made the same admission. “We are working to address the leak,” he said, adding that “our expectation is that the halls will reopen before its end 2020 ». However, a fourth… employee disagreed with the previous ones: “Renovation work is underway. Leaks are rumors and are very “pulled”. “I think the room will open soon,” he said. 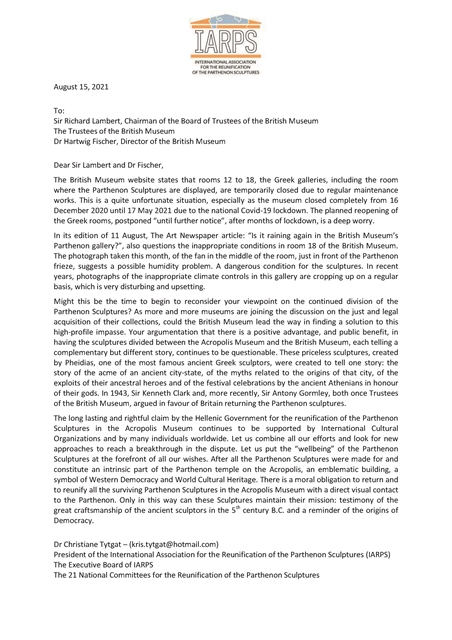 The representatives of the campaign for the repatriation of the Marbles are upset, expressing anxiety even for the integrity of the Sculptures. At 15 In August, the International Association for the Reunification of Parthenon Sculptures (IARPS), which represents 20 national committees from around the world, wrote on the subject to Museum President Sir Richard Lambert, Director Dr. Hartwich Fischer and his commissioners. In the letter – presented today by “TA NEA” – the Union expresses its “deep concern” about the fact that the room remains closed, emphasizing that “the possible problem of humidity creates a dangerous situation for the Sculptures”. At the same time, he calls on the Museum to “reconsider its position on the ongoing division of the Sculptures”, noting its “moral obligation” to reunite all the surviving Sculptures in the Acropolis Museum “. “It's sad that the room 19 has been closed since last December until recently “, IARPS President Dr. Chris Titgat told” NEA “, noting that” the unsuitable air conditioning conditions prevailing in the room are a cause for concern “. “I hope,” he added, “that we do not have to wait any longer 21 years to admire the Parthenon Sculptures in London again, as happened in 1940, when Duvin Gallery was hit by a bomb and remained closed until 1940! At that time, of course, the Sculptures were kept in a safe place and remained intact. ” . “It simply came to our notice then. So, are they having a dialogue on such an urgent issue? It's time for the British Museum and Britain to move on to 21 the century “, stressed in” NEA “Paul Cartletz, a famous Hellenist from Cambridge, vice-president of IARPS and the British Sculpture Commission (BCRPM).

” I would be happy if the room “It was closed permanently, and not temporarily as it is now, because that would mean that the magnificent Sculptures snatched by the looting Lord Elgin would be reunited at the Acropolis Museum,” the chair of the British Committee for the Reunification of Sculptures told NEA. BCRPM) Janet Suzman. “No one can say for sure what kind of works are made in the Greek rooms of the British Museum and for how long,” added the internationally renowned Shakespearean actress, stressing that in winter, open emergency exits in summer, water leaking from the roof when it rains. We call on the British Museum to allow the reunion of the Sculptures in the emblematic Acropolis Museum “.

The” Greek “rooms were closed to the public on 17 December 2019), when the building was locked due to the lockdown imposed by the British government. The Museum reopened five months later, on 17 May 2021. However, the halls of Ancient Greece remained closed, with those in charge constantly postponing the date of their reopening. According to information, the heavy rainfall 23 in July in London once again caused water to leak into the Marble Hall, a few centimeters from the exhibits. Proponents of the return express concern that moisture could damage ancient works of art. The website of the British Museum states that the “Greek” rooms are “closed until recently”, due to “regular maintenance work”. The visitors of the Museum, walking towards the hall 17 – known as Duvin Gallery -, which houses the Sculptures, are forced to stop in the room 25. There, a plywood door, which was recently installed as part of a temporary construction, blocks the entrance to other Greek exhibitions.

The problem of water leakage in the room 20) was first highlighted in December 2018. Since then, it remains unresolved, with many commentators talking about an unacceptable and embarrassing situation for a museum of British scope. Ten days ago, UNESCO highlighted the poor conditions of the Sculpture Exhibition, expressing “its concern that the Duvin Hall is not open to the public due to necessary repairs” and adding that it “looks forward to reopening in due course”. Almost every time it rains profusely and the rain lasts a long time, water accumulates on the roof, which sometimes drips into the Sculpture Hall. Usually, the situation is treated with… buckets placed next to the Marbles and with cloths spread on the floor! At the same time, signs of mold are visible on the roof here at least 20 years. This time, however, it seems that the problem is more serious and keeps the room closed for almost a year. In his exclusive interview with “NEA”, in January 2019, the director of the Museum Dr. Hartwich Fisher had claimed that it was “a small leak” that was “corrected immediately”. The reality, however, denies him. “It is shocking that a world-class museum is forced to close its rooms due to water or moisture leaks. Almost three years later, it seems that this “small leak” has not yet been corrected. “On the contrary, it led to the closure of the room for a number of months,” Marlene Godwin, the British Commission's director of international relations, told NEA. He added: “The fact that they do not tell us when it will open, at least shows a lack of professionalism.” The last time the problem arose was in August. “The conditions for exhibiting the sculptures at the British Museum are from offensive to dangerous,” said Culture Minister Lina Mendoni. However, a Museum - said that “the problem with the leaks has been fixed”.

The British Museum's response to the “NEWS”

In her statement to “TA NEA”, the representative of the Museum refrained from answering exactly when the Greek rooms will open and what kind of works are in

“The British Museum is housed in a historic and listed building. Its facilities are under constant evaluation. We have a team of experts who carry out regular inspections throughout the Museum, in order to identify risks for its collection and to ensure their proper management. The care of the collection and the safety of our visitors and staff are top priorities for us.

»The necessary work performed is part of a repair and maintenance program of the building, which will allow the implementation of other projects at the Museum in the future. Along with these necessary repairs, we are developing a strategic master plan for the transformation of the British Museum in the future. This includes the renovation of our historic buildings and grounds, the improvement of our visitors' experience and an ambitious presentation of our collections in a different way over the coming years.

»Temporarily, the rooms 17 to 20 on the ground floor are not accessible to the public. The Museum prepares a program of works in these rooms. However, the planning of the works was delayed due to the effects of the pandemic on the Museum program. Additional work and inspections were carried out during the summer. These rooms are currently closed to ensure the safety of our visitors and our collection while these inspections are carried out. In the past there was some inflow of water in some areas of our rooms that were closed. We have not set a date for their reopening, but the goal is for them to open later in the fall. “

Ocean of support, silence of the museums

“Le Monde” dedicated an extensive report yesterday to the issue of the return of the Parthenon Sculptures on the occasion of the “imperative” appeal addressed by UNESCO Intergovernmental Commission in the United Kingdom to review its position. “Athens is claiming these marble sculptures here and “) years, with an insistence that imposes admiration”, commented the editor-in-chief of the French newspaper, Michel Guerin. He pointed out both the “ocean of support” for the Greek request and the silence of the great western museums, which see the British position as a “dam”: “If it collapses, the valve of returns could open, and these concern tens of thousands of works obtained under questionable circumstances. “

‘They do things that you don’t do to human beings’: Chinese whistleblower describes torture in Uyghur re-education camps

Great event at Harvard for the Greek Revolution of 1821