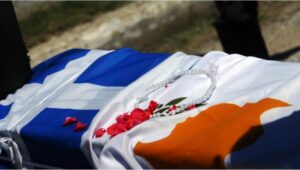 After 47 years the bones of seven Greek soldiers missing in action whose traces were lost in 1974 in Cyprus will return to Greece. They are Colonel Kokka Konstantinos, Colonel Giannakopoulos Nikolaos, and the Reservists Koukoulis Thomas, Karagounis Charalambos, Velona Dimitrios, Thanopoulos Dimitrios, and Doitsidis Christodoulos.

The first six served in the Greek Special Forces on Cyprus (ELDYK) and the seventh was a Paratrooper who had been transported to Cyprus on July 21, 1974, by NORATLAS aircraft from the First Squadron of Maleme, Crete during the invasion of Cyprus by Turkish forces.

The remains of the seven heroes will be transferred to the Holy Temple of God Wisdom in Strovolos, where a Trisagion blessing service will be held in the presence of the representatives from the Greek state, religious and military leadership of Cyprus and the Deputy Minister of National Defence Nikos Hardalias.

A ceremony of handing over the bones to the members of the families of the heroes who are in Cyprus for this purpose will follow.
The remains will then be transported by C-130 to Greece for burial at the places of origin of the seven heroes.

Woman who married herself gets divorced…(-s)

Associated Press report: US to require vaccines for all border crossers in January

Ambassador: Research and innovation a reason for German firms to operate in Greece

Journalist’s testimony: Two Greek-Cypriot soldiers buried in the yard of a house in Varosia