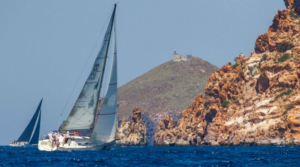 The amazing track of the Aegean, the beauties of the Greek islands and a route designed by sailors for sailors, were incentives for sailors from all over the world to be interested in the “AEGEAN 600”.

The race that will be organized by the Panhellenic Offshore Sailing Club co-organized by the Attica Region, from July 2 to 10, will be 600 nautical miles, non-stop and the goal of the organizers is to become an institution that every year will highlight and advertise the ideal conditions for sailing that exist in Greece, as well as the beauties of the country.

Boats from 16 countries will take part in the event. Initial registrations exceeded 70 but the special conditions prevailing around the world due to the pandemic, with entry bans and the fact that the Corinth Canal remains closed, etc., did not allow all crews to be in the July 4, at the start, in front of the Temple of Poseidon, in Sounio.

The enthusiasm for the race is so big that crews from 12 boats that did not manage to come this year, although they had paid the participation fee, did not accept a refund and asked instead to “secure” the right to participate for next year’s race.

The Organizing Committee received messages from sailors from the United States, New Zealand and Australia, who asked for details of the next event in order to schedule their participation in a timely manner.

The route has been designed by a team of sailors who know the expectations of their athletes in a race of this level. Thus, the competitors will enjoy impressive and full of beautiful images, crossings from the Caldera of Santorini, but also difficult, full of challenges, crossings through the straits of Kos and Mykonos – Delos.

Secret island getaway of Andros near Athens in Greece

Island of Patmos showered with praise by global media (photos-video)