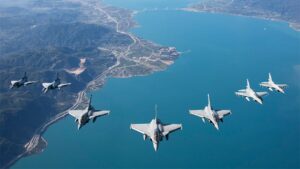 In the forests and plains of the Champagne-Ardenne region, where once the great powers went into battle, the French armed forces are beginning to prepare for the return of a major conflict. Planned for 2023, Exercise Orion is a full-scale divisional exercise that will last several days, based probably out of camps at Suippes, Mailly and Mourmelon. It will involve the full range of French military capacity on a scale not tested for decades. The drill will include command-post exercises, hybrid scenarios, simulation and live-fire drills. Around 10,000 soldiers could take part, as well as the air force and, in a separate maritime sequence, the navy. Belgian, British and American forces may join in.

There are other signs that the French armed forces are in the midst of a generational transformation. In January the general staff quietly established ten working groups to examine the country’s readiness for high-intensity war. French generals reckon that they have a decade or so to prepare for it. The groups cover everything from munition shortages to the resilience of society, including whether citizens are “ready to accept the level of casualties we have never seen since world war two”, says one participant. The spectre of high-end war is now so widespread in French military thinking that the scenario has its own acronym: HEM, or hypothèse d’engagement majeur (hypothesis of major engagement).