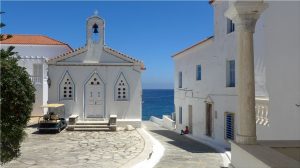 Accolades for the island of Andros keep coming in the major international media, which continue to sing its praises.

The Sunday Times has named Andros the top tourist destination for uncrowded vacations and the Daily Telegraph urged the travelers to seek the quietest places in Greece and included Andros in the most magical destinations in Greece for 2020.

Meanwhile, the municipality of Andros has adopted an original way to promote the island with pictures and experiences displayed in the Athens metro.

The campaign will last two weeks and pictures from the island will decorate 17 metro stations under the slogan “Far away, and yet so near!”.

The Children’s Crusade: Thousands of children march to Holy Land but never return

Rodrick Beaton: “Whatever the Greek achieves, is always judged by the criteria of the ancient ancestors”

Fair dinkum – to be sure: Woman’s Australian accent goes Irish after tonsil operation

These are the Greeks islands that are Covid-free

Great city routes to explore on foot in Athens