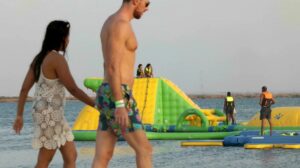 For Asma, spending a day on the beach with her boyfriend was unthinkable until recently in deeply conservative Saudi Arabia.

Now, the 32-year-old is dancing with her partner on white sands fringing the Red Sea, to music thumping from loudspeakers.

It’s a small reminder of the changes underway in the Islamic kingdom, which is attempting to ease some of its tight social strictures in a modernisation drive at the same time as a crackdown on dissent.

Music was banned in public places until 2017, a measure enforced by the religious police, and women were only allowed to drive a year later. Beaches are still usually segregated between men and women.

But for 300 Saudi riyals ($80) each, Asma and her boyfriend can enter Pure Beach near Jeddah, with its music, dancing, and inflatable water park spelling “Saudi Arabia” in English when viewed from above.

“I am happy that I can now come to a nearby beach to enjoy my time,” she told AFP, wearing a blue dress over her bathing suit.

“It is the epitome of fun… it was our dream to come here and spend a beautiful weekend.”

Beachgoers swim in the turquoise waters and women wear bikinis, some of them smoking shisha. As the sun sets, performers dance to Western music on a lit stage as a couple embraces nearby.

War crimes may have been committed in Ethiopia’s Tigray conflict, report says