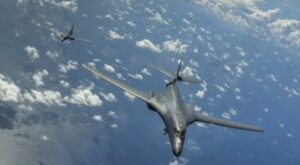 Russia’s defence minister on Tuesday accused U.S. bombers of rehearsing a nuclear strike on Russia from two different directions earlier this month and complained that the planes had come within 20 km of the Russian border.

The accusation comes amid a period of high tension between Washington and Moscow over Ukraine, with US officials voicing concerns about a possible Russian attack on its southern neighbour, which the Kremlin has dismissed as untrue.

Moscow has accused the United States, NATO, and Ukraine of provocative and irresponsible behaviour, saying the United States is supplying weapons to Ukraine, that Ukraine is using Turkish drones against Russian-backed forces in the east, as well as that Ukraine, and NATO, were conducting military exercises near its borders.

Russian Defence Minister Sergey Shoygu said during talks with his Chinese counterpart Wei Fenghe that Moscow had seen a significant increase in US strategic bomber activity near its borders, claiming they had carried out 30 flights near Russia this month, which is 2.5 times more than the flights made during the same period last year.

“This month, during the US Strategic Forces’ Global Thunder exercise, 10 strategic bombers carried out nuclear strike simulation exercises against Russia, in fact from both the west and the east,” he said.

‘We’re very alarmed’: WHO warns there could be half a million more COVID deaths by spring across Europe

New passports in Skopje to be marked “North Macedonia