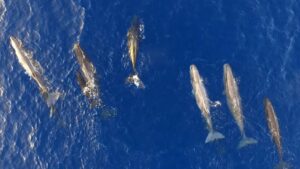 Incredible drone footage of a family of sperm whales swimming in the Ionian Sea was captured by Pelagos Cetacean Research Institute.

The aerial shots were recorded on the initiative of the scientists of the Institute in the framework of programs for scientific purposes, but also in an effort to raise public awareness of the need to protect these marine animals. It is the first time such footage was recorded in the Mediterranean, while it is possible that they are the only ones in the world.

The Pelagos Cetacean Research Institute is a scientific non-profit organisation focused on the study and conservation of cetaceans, aquatic mammals constituting. Cetaceans include whales, dolphins, porpoises, and other related species. Using science as a tool, the Institute is constantly expanding the limits of knowledge about cetaceans in the Greek Seas and the Mediterranean. This knowledge is then spread to society and used as a base start for conservation efforts focused on cetacean species populations.

The Institute has been studying the sperm whales from Kefalonia to southern Crete and Rhodes- for the last 25 years and knows most of them one by one, thanks to the method of --identification.

The sperm whale is the legendary Moby Dick. Males can reach up to 20 metres in length in the oceans and 15-16 metres in the Mediterranean and Greece. Mediterranean sperm whales are directly threatened by human activities. There are only about 200 living throughout the Eastern Mediterranean. Most of them live along the Greek trench, which has been recognised as an Important Marine Mammal Area (IMMA) – an area of ​​global importance for cetaceans.

Lake Stymphalia – Where Hercules did his 6th Labour (amazing video)

TUI: German bookings for holidays in Greece are better than 2019!

These are the Greeks islands that are Covid-free