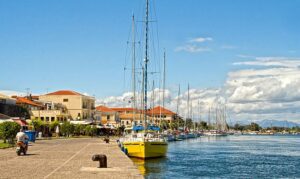 A stop at the archaeological museum of Nikopolis, on the 5th km of the Preveza – Ioannina national road will convince you that History always has a lot to teach us and is ever impressive. This is partly thanks to the great work by deputy mayor of Preveza, Leonidas Argiros, who curated the displays. And of course, thanks to the actual exhibits that make this the largest Roman history museum outside Italy.

After all, the battle of Actium (September 2nd, 31 BC), between Octavian and Mark Anthony and Cleopatra, that took place right outside Preveza, played a major role in determining the future of the Roman Empire. The battle took place as a result of the growing distrust between Octavian and Mark Anthony, and their fight for power over Rome, after Julius Caesar’s death. It ended with Antony’s and Cleopatra’s defeat and escape.

A giant step for hamkind: Hamster survives daring trip into the stratosphere on a flying balloon

Greece – Abu Dhabi flight for Less Than One Euro!

Visit enchanting Anthochori to travel into a fantasy world