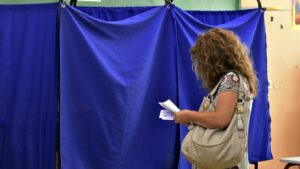 The dominance of Kyriakos Mitsotakis and New Democracy in the Greek political scene is indisputable, as reflected by the findings of the Marc company poll on behalf of “Proto Thema“.

After 22 months of governing and 15 months of managing the pandemic, the previously recorded fatigue of the citizens gives way to a slight improvement in the percentages of the ruling party and the popularity of the Prime Minister while the citizens disapprove of SYRIZA for its opposition tactics.

The data on the intention to vote by reduction on the valid ones, show New Democracy at 39.3% maintaining a strong lead of 16.6 percentage points over SYRIZA which is at 22.7%.

The Times: Bridging the Gulf – Why Greece is making new friends in the Middle East (Analysis)

Geneva 5+1 talks on Cyprus fall through

The picture is similar between Kyriakos Mitsotakis and Alexis Tsipras for the question of the most suitable for Prime Minister, with Mr. Mitsotakis being at 51.3% against 22% of the president of SYRIZA.

Finally, the official opposition seems to be paying the price for its political decisions, since 77.3% disapprove of its tactics so far, while 53.4% ​​of citizens judge the government’s work as positive.

The Indian government ordered some posts to be removed from social media – what did they say?

Breaking – Cabinet reshuffle to be announced at 12pm

Turkey lobbies to get back in F-35 program