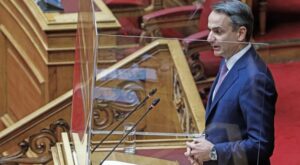 Greek Prime Minister Kyriakos Mitsotakis is speaking to Parliament about the national plan to address child sexual abuse and exploitation.

According to the Prime Minister, most of the incidents reported concerned adults within the wider family environment.

“Today, 1 in 5 children in Europe is a victim of some form of sexual abuse”, he said. “It is unsettling that only a small percentage of cases are divulged to the authorities”, adding that it was “a silent crime especially when sexual abuse is certified by forensic reports. Abuse does not exclusively mean rape. In Greek society, there are still inactions and stereotypes. It is to these prejudices, which are exacerbated by the confusion of services and legal red tape, which the National Plan for the Protection of Children from Sexual Exploitation and Sexual Abuse will address.”

No lockdown with 73% of adults vaccinated, says Greek Health Minister

Crucial EUMED 9 meeting in Athens – How will Macron respond to AUKUS Alliance?

In a surprising move Erdogan invites expelled Greeks back to Constantinople