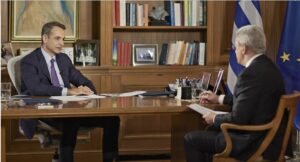 PM Mitsotakis ruled the prospect of a coalition government with the main opposition party of SYRIZA in an interview on  Greek television Thursday night. Speaking to news anchor Nikos Hatzinikolaou on ANT1’s “Enopios Enopio” Mitsotakisclarified that he had no intention to hold early elections.

“I have pledged that we will exhaust the four years because I consider this to be institutionally correct and imperative. I have no intention of changing my mind,” he said, underlining that he had “many windows” in the past to call elections, especially in May and June last year when the government’s popularity was higher in relation to the pandemic.

The Varying Power of Passports (infographic)

“It is absolutely legitimate for every prime minister to want to be re-elected”, added Mitsotakis, estimating that things would not get worse in the near future and, on the contrary, “the situation in the country in 2023 will be better than it is today”. In particular, he said he was “absolutely convinced that the economy will recover and, God willing, we will have finished the pandemic earlier”, stressing that “I have no hesitation in telling you that we want to run out of four years”.

Asked if he plans to do a new cabinet reshuffle, he said the concept of reshuffling just to give MPs Ministerial offices from regions that the ruling party seeks to improve its electoral performance does not fit his logic. “The changes I have made to the government have been few, because I have always believed that there must be continuity. The only criterion was the effectiveness of the ministers and their ability to serve the specific portfolio that I entrusted to them,” he explained.

PM Mitsotakis: Significant outbreak of cases among the unvaccinated