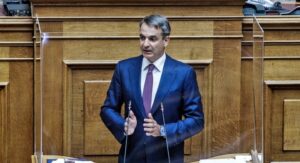 Prime Minister Kyriakos Mitsotakis is delivering his opening statement in the Parliament Plenary Session on the debate at the level of political leaders on the economy, the price increases, and the increase of the energy cost.

The prime minister is expected to outline a set of measures the government has taken to support households and businesses. According to information, he will underline the permanent tax cuts that have alleviated the burden on citizens, while he will also refer to the measures of 43 billion euros to deal with the consequences of the pandemic as well as to the 620 million euros that will be given to deal with the shocks from the energy costs.

The PM said: “There is a global price crisis. The exit from the lockdowns brought a global increase in demand and consumption without any products available. Increased demand has pushed up prices and chained inflation. And for these reasons, energy prices rose, boosting the value of production and transportation of goods.”

“There is a debate in the global community of economists and bankers about the cause of the phenomenon. Most argue that the phenomenon associated with unprecedented demand disruption and rapid recovery that found companies unprepared will be temporary. There is also the view that global inflation is the result of loose monetary policy by central banks and will have more structural features.”

The PM said that amid the Covid-19 pandemic his government managed to raise employment opportunities, while he said there was a reverse of the brain drain of the past years.

On inflation, the PM said the reality today showed that Greece has the 3rd best performance in Europe in terms of inflation in October with the European average being at 4.1% Greece at 2.8% countries like Spain at 5.4%, and Romania at 6.5%.

‘The most important email I have ever missed’: Journalist’s ‘million dollar’ Adele interview canned