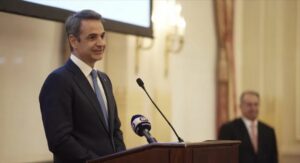 Prime Minister Kyriakos Mitsotakis underlined Greece had regained its prestige and was on a path of recovery after the ten-year crisis in an event, attended by members of the Greek community in the United States, organised by The Hellenic Initiative.

“I believe that Greece is much stronger today than it was a decade ago,” outlining the transition from the era of the memorandums to the “Greece 2.0” plan, which as he said was formed by Greeks for Greeks and was approved by the EU, “we are already receiving the first European funds to implement it.”

Mitsotakis, speaking before an audience of the Greek community last night in New York (03.00 am Greek time), referred to the recent past: “In the past decade, we have always asked Europeans for support for rescue packages. We have always been obliged to comply with their reform guidelines. For the first time, we have our own plan for the future of the country.”

“I have never seen such great interest in long-term investments in Greece,” he stressed about the prospects of the Greek economy.

“Vote of confidence in the Greek people”

“And people come to Greece not only for the stable political environment, for the low taxes, for the natural beauty when they invest in tourism or for the sun and the wind when they invest in renewable energy -s. I believe that they come to Greece primarily for the people. And we have great people in Greece, a young generation that is very educated and a diaspora that is interested in returning to Greece for the first time.”

“We are pleased to revise our growth forecasts for 2021 from 3.6% to 5.9%. I expect that this growth will be even higher, but we prefer to be conservative in our estimates,” noted Kyriakos Mitsotakis.

On the matter of the country’s presence on the geopolitical stage, he said: “Greece is stronger economically, but it is also stronger geopolitically. We have created a network of strong alliances in a relatively volatile region of the world.”

Finally, the Prime Minister emphasised the reversal of the brain drain trend: “We are seeing young people who have left Greece in the last decade seeking to return to Greece to build a life in Greece, start a family in Greece and tie their professional future with the future of the country. And that is very encouraging for me personally and it gives us, honestly, the energy and the courage to continue on this path. “

PM Mitsotakis: I informed Stoltenberg about the Turkish violations & overflights in the Aegean (video)

Greek Minority in Albania: 108 years since the signing of the Protocol of Corfu (photos)