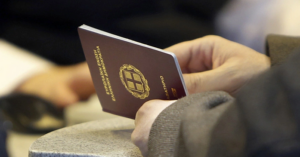 The Minister of Digital Government, Kyriakos Pierrakakis, spoke about the digital renewal of passports within 2021.

As he told ANT1 on Tuesday morning, it is a matter of a few weeks to implement this goal as well, while the possibility of the signature authentication being provided through Gov.gr is a matter of time.

Regarding the MyHealth application, he stressed that it provides citizens with full access to the history of prescriptions.

“We believe in it a lot as an application, because the health file must be digital. Only doctors had access to the prescription system. But we did not have access to our data. But now we have through this application”, he said. “We created this application for every citizen to see not only his prescription but also to receive medical certificates. Anyone who needs a certificate for the gym, for example, can find it there”, added the Minister of Digital Government. “It is very important for the NHS to have this file and for the citizens to have ownership in the things that concern them”, he noted and explained that there is no security issue, as the are the necessary measures have been taken.

Connecting the World Under the Sea (infographic)

Kyriakos Pierrakakis also referred to the freedom pass data platform that concerns a 50GB data package for young people aged 15-17 who have received the first dose of the coronavirus vaccine. He announced that with the opening of the platform, 14,000 applications were made and 50 GB have already been credited to 11,000 children. “The parent chooses a phone number and in this number the 50GB are credited for a period of five months”, noted Mr. Pierrakakis, while he added that “in this age group about 109,000 young people have been vaccinated, 33% of the total population of children 15- 17 years old. We hope that this number will increase further. Let me mention that when FreedomPass was announced by the Prime Minister for the ages from 18-25, we were initially at 13% and now we are at 53%. Those who got the FreedomPass card are 410,000”.

Mr. Pierrakakis also referred to the new platforms planned by the ministry in collaboration with the Minister of Civil Protection, Takis Theodorikakos and announced that in a few weeks citizens will be able to renew their passport from home by uploading a digital - and paying for it a relevant fee, while at the same time he underlined that “before the end of the year we will provide as a service the signature authentication that will be done digitally”.

Handelsblatt – Support for small and medium enterprises in Greece

Greeks a step before taking off Covid masks outdoors