No one wants to outlive their child. But in Nong Bua Lamphu, an entire community is living with that very burden.

The victims, killed at the hands of an angry ex-policeman who rampaged through their pre-school, included 24 children – some as young as two years old – as well as adults, authorities said.

As we arrive, we can hear screams from inside.

This is where the families have come to receive the bodies of their little ones.

It is incredibly raw – there are people in so much distress they can hardly walk, hardly breathe.

At the door to the side of the temple, a father rocks as he weeps. This is where they’re meant to fill out paperwork – a formal recognition of an unbearable loss. But everyone is struggling.

She is trying to stand while sobbing uncontrollably – her family propping her up. Her son, four-year-old Prapankorn was killed.

She shares utterly gut-wrenching details of his death. Her son was stabbed in the face.

Tragically, Rasamee saw the -s of his lifeless body. She tells me “he was lively, caring and always told her how much he loved her”.

Distressingly, it turns out she also knew the attacker – they had gone to school together, she says, and he performed well. But that same boy became a man who entered the place where Rasamee’s son should have felt safe, a haven, and made it a hell.

At the nursery, what appears to be a bullet hole in the window hints at the horror inside.

It’s the small details that hit you here, like the half-empty milk bottles by the gates. 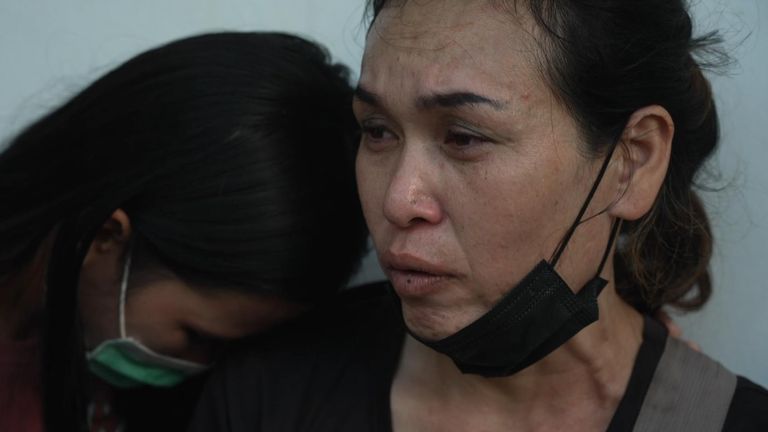 Families have been gathering all day. I see one woman, heavily pregnant. She looks absolutely exhausted. Her name is Marisa – and she tells us she hasn’t slept all night.

As she carries one child, she is mourning another – her four-year-old son was among those killed.

Just a few yards away, I meet Seksan Sriraj who is sitting staring ahead with utter bewilderment in his eyes. He tells me he has lost his wife.

She was a teacher and she, too, was pregnant. That day, he says, she was in charge of the room where the children slept.

As they grieve, just a ten-minute drive away, we find the home of the attacker, a 34-year-old who police say was fired from the force and was facing a drug charge.

Outside his home, only the burnt shell of his truck remains. Neighbours tell me he set it alight before entering his home and killing his own wife and stepson. The toys outside signify another trace of a childhood now frozen in time.

Across the road, I meet Prantumporn. She says her 63-year-old father, Udorn was also killed.

He had tried, she said, to warn others. He’d asked the attacker if he was OK. But he just replied, “I’m going to shoot you.”

What this community has seen, up close, is the kind of trauma that changes the fabric of a society.

‘We are in a battle and we are going to win’: Confidence and exuberance at Lula da Silva rally in Brazil

What happened during the Cuban missile crisis – and why is it being compared to Russia’s war in Ukraine?

Boy, 13, critically injured after being shot at US school as second pupil detained

Who are the Uyghur people and why do they face oppression by China?