When visitors walk to the Pantheon in Rome and meet its colossal dome, they usually experience the same theatrical and evocative atmosphere that the 2 years ago 01 visitors of the glamorous monument.

“Anyone entering the Pantheon immediately feels the overwhelming weight of human history, but also the incredible lightness of human creativity,” said John Ochsendorf, a professor of architecture at MIT and former director of the American Academy in Rome. ) “You come to this huge space and look up and see the sky or a cloud passing by. And you wonder: “How did they do that two millennia ago? »

The story of the Pantheon

The Pantheon is the oldest building in the world that is still used today. Since the 7th century, it is a Roman Catholic church.
Built around 110 AD by the Roman emperor Publius Aelius Hadrianus, was in fact the third repetition of the construction. The first Pantheon collapsed around 110 AD. and rebuilt shortly after, but was struck by lightning and burned around 125 AD. The bad luck of these buildings led to rumors that the Pantheon was cursed.
The facade of the completed structure was based on ancient Greek motifs: gable and Corinthian columns. The interior, evocative and airy, covered by a dome that to this day is still the largest unsupported concrete dome in the world.

The Pantheon means “for all the gods” and although it is commonly believed that This structure was used as a place of worship dedicated to Roman deities, its original purpose is actually unknown.
With few references to ancient texts, historians are somewhat confused. Although the Pantheon could be a temple, Roman buildings were usually multi-purpose structures, explains Lynne Lancaster, an architectural historian and humanities educator. “And what really happened in the Pantheon is hard to understand.”

Legend has it that this is the very place where the founder of Rome, Romulus, ascended to paradise. Others believe that the Pantheon was the place where the Roman emperor could communicate with the gods. In any case, the imposing structure of the building was a clear display of strength, an “important symbol of imperial power,” said Luca Mercuri, the current director of the Pantheon.

Indeed, the Roman architecture of the time incorporated wealth, power and dignity. Centuries later, neoclassical architects cited the combination of Pantheon galleries and domes to enrich their buildings with the same values, from the US Capitol in Washington to the Somerset House in London.

The Pantheon was an architectural marvel of the Roman Empire. The circle of the roof (or “eye”) brings the sky literally into the building. The sun shines and when it rains it looks like one is inside a waterfall.
During the Middle Ages, there were many religious leaders who questioned the sanctity of the Pantheon, believing it to be his work. devil. 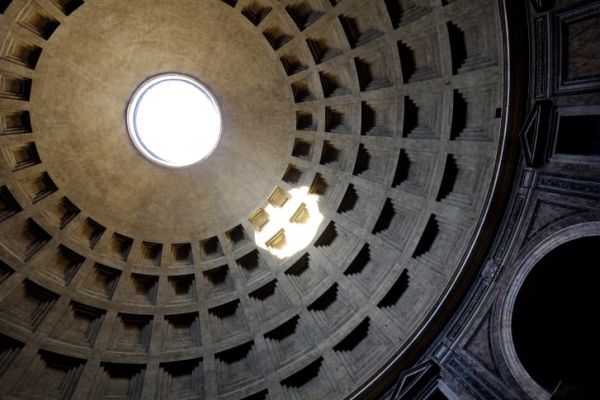 Not believing in the power of Engineering, they spoke of… satanic forces that held the dome and gave all this magical atmosphere to the Pantheon.

To this day, despite the fact that several of its structural secrets have been revealed, the Pantheon continues to enchant the visitor. as its director says: “It's one of the few places in the world where you can really watch the Earth spin.”

With information from CNN

Archaeologists: Antiquities are sacrificed while the Thessaloniki Metro was extended for March 2025

100 years of Michalis Kakogiannis: June 11 to 14 in Ilioupoli

Eight tombs of the 4th to 2nd century BC were found. – They belong to the necropolis of ancient Elis

Methoni Castle: Part of the enclosure collapsed due to the rains