It may have taken a while, but the first medal in Tokyo came and it’s gold!

Stefanos Douskos in the first 500 meters saw Borz and Nielsen start better but made sure not to lose contact and after a while launched his attack.

Just before a thousand meters he passed first and did not look back again!

At a steady pace, with great concentration he kept the lead and when his opponents tried to make their attack, he also increased his speed and increased the difference winning the gold medal.

But apart from the Olympic record, the first Greek medal in Tokyo, is also the first rowing gold medal in the modern Olympic Games and the fourth overall medal!

The Lamborghinis sold in Greece amid the Covid-19 lockdown (-s) 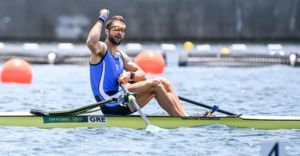 Greece records 3,066 Covid-19 cases and 24 fatalities in Greece on Monday

Magnitude 5.7 earthquake strikes the island of Crete on Wednesday, felt in Egyptian cities