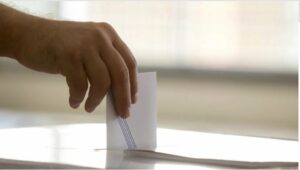 Ruling New Democracy maintains a steady lead of 10.9 points against SYRIZA, according to a nationwide poll by pollsters Interview on behalf of Politic.

According to the findings, ND remains in first place with 33.2% followed by SYRIZA with 22.3% on the question of voter intentions.

Compared to the last poll in December, both the ruling party and the main opposition saw their percentages shrink with those polled appearing “undecided”.

At the same time, PM Kyriakos Mitsotakis (46%) is still ahead of Alexis Tsipras (25%) on the question of who is more suitable to hold office. The majority (57.4%) disagree with Alexis Tsipras’s request for early elections with 35.7% supporting his demand.

The coronavirus remains the biggest - of concern (23%), although the degree of concern it has caused has receded since the onset of the pandemic.

The Greek economy is also high as a factor of concern (23%) as the citizens believe that the Greek economy remains frail. Other matters of concern that follow are inflation (17%), Turkish provocation (10%), and unemployment (9%).

UPDATE: Kyriakos Mitsotakis: The climate crisis is here, we have protected thousands of people

Mitsotakis to Johnson: Greece is a safe country for British tourists