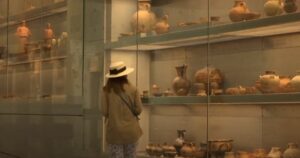 Museums in Greece reopened to visitors on Friday as the country officially launched its tourist season.

The Acropolis Museum, home to the treasures found in and around the ancient citadel, along with other museums have been closed since mid-November, as part of lockdown measures to try and curb the spread of the coronavirus.

Open-air archaeological sites around the country, including the Acropolis, were allowed to re-open in March.

One archaeology student in Athens as part of a study abroad programme welcomed being able to visit the Acropolis museum after already seeing the archaeological sites as well as the museum’s online tour.

Another visitor took advantage of the museum’s opening day, hoping to beat the crowds.

Last year, the number of visitors to Greece plummeted by 78.2% to 7.4 million – from a record 34 million in 2019 – according to official data, with a corresponding drop in tourism revenues.

Greece is hoping to claw back half the 2019 visitor level.

It’s vowed to finish vaccinating its entire island population over the next six weeks and will even waive test requirements for tourists who have received vaccines made in Russia and China that are not approved for use domestically.

Greek Parliament to be illuminated in honour of Greek Pontian Genocide

Man, 64, says he died of Covid-19 for minutes and came back to life

Persephone, the robot guide, leads visitors in a Greek cave

Explore the “Lovers’ Cave” half an hour from Athens (video)