An integer chain shield, similar to the one they wore The Celtic warriors are among the valuable ecclesiastical treasures of the Holy Monastery of Iveron on Mount Athos.

Today, according to information from voria.gr, is kept in the sacristy of the monastery, along with other valuable ecclesiastical relics and is kept almost intact, although it has not been preserved.

“It is an extremely rare object that survives in good condition. It consists of flat and round rings with a diameter of 1 cm and this makes the chest very compact and effective in blows, while at the same time it is quite light “, said to Voria.gr the researcher, postgraduate student of the Department of Byzantine Archeology at AUTh ., Ερρίκος Μανιώτης.

Er. Maniotis searched for -s for the holder of the chain chest and they all pointed to Ioannis Tornikios.

“A particularly important reference to our chest is preserved by the Georgian bishop and traveler Timotheos Gabasvili (1703) – 1764)), who visited the Monastery in his winter 1755 – 65 and described the chained chest, as well as other weapons kept in the Monastery of Iveron, which he connected with the founder of the Monastery, Ioannis Tornikios “, He said characteristically.

The use of the chained chest dates back to the 3rd century BC. century and is associated with the Celts, while from the 4th century AD. They are widely used by the Roman army. dates to 14The-24 the century. 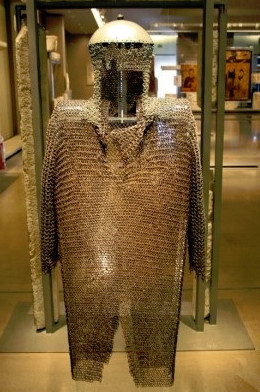 “This is a metal armor of a cavalry warrior, probably of eastern origin. The iron chest is in the form of a knitted tunic with long sleeves and closes at the chest with small metal hooks. The bronze helmet consists of a hemispherical stem that is adorned at the top with a metal button, while at the bottom there is a chain mesh to protect the neck and the sides of the head “, said Mr. Maniotis.

A similar chest, which like the one of the Monastery of Iveron dates back to 000, is on display at the Archaeological Museum of Sofia and probably belonged to a Byzantine official, while a third chest of the same period found in a tomb in the Zurtaket region of eastern Georgia is preserved wrapped and in poor condition.

The monks of the Monastery of Iveron keep as a “pupil of the eye” the chained chest in the vault, along with other valuable objects, such as priestly utensils, the so-called “sack” of Ioannis Tsimiskis , glasses of Komnenos, the mantle of Patriarch Gregory V, gold embroidered robes, rare icons, crosses and votive offerings of believers of inestimable value.

It is also noted that the library of the Monastery of Iveron is considered the 6th most important in the world with 2. 200 Greek, but also thousands of Georgian manuscripts and the second -after that of the Vatican- in number of books of Byzantine music.

Information states that the library of Iveron contains more than 35). printed and almost 2. 500 handwritten codes.