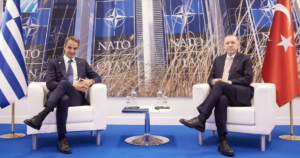 “On March 13, the Prime Minister will be in Constantinople, where he will celebrate Orthodox Sunday at the Ecumenical Patriarchate.

The Prime Minister will then have lunch with Turkish President Recep Tayyip Erdogan at his invitation.

The Prime Minister has stated that he is always open to a meeting with the Turkish President, especially under the conditions created by the Russian invasion of Ukraine.

In this difficult time, the two countries, despite our differences, face common challenges in a number of challenges.

Challenges that need to be addressed in the logic of solving problems rather than creating more”, the government spokesman said.

PM Mitsotakis: The “panic button” for women at risk is coming – How will the application work

“The Russian invasion of Ukraine has dramatically changed the security situation in Europe, but at the same time it has expressed the international community’s unequivocal condemnation of all forms of expansionism and revisionism”, he added.

“The Prime Minister will come in a positive mood, focusing on the issues and not on the rhetoric. Without differences from the stated positions of Greece that are based on international law”.

PM Mitsotakis: Our relations with Israel are better than ever (video)

Mitsotakis for trade & catering: Vaccinated will not be deprived of their freedoms (photos)

PM Mitsotakis in Libya: We want the cancellation of the Libya-Turkish memo