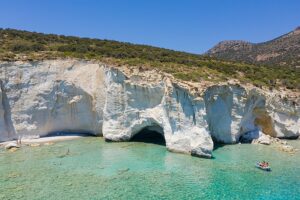 The Greek island of Milos was rated the best island in the world, as well as Europe, in a World’s Best Awards 2021 survey staged by leading US travel publication Travel + Leisure, involving the participation of many readers, who gave the island a near-perfect score of 95.5.

These latest distinctions come just days after Greece and Santorini’s respective prizes in the “Favourite Country” and “Best Island in Europe” categories for the American tourism awards FXExpress 2021 Awards, based on the public’s voting, confirming that Greece remains one of the most popular destinations among American travellers.

Following up on the announcement of this year’s awards, Travel + Leisure writers noted, amongst other things, that Milos emerged as the winning island courtesy of its friendly locals, who welcome visitors and encourage them to explore the picturesque villages, the exceptional tavernas, as well as the numerous idyllic beaches, whose colours vary depending on whether they are formed by shells, pebbles or sand. The Travel + Leisure team also noted that Milos may be renowned for its Aphrodite of Milos statue (Venus de Milo), but offers lots more beyond its archaeological discoveries such as numerous accommodation choices, prize-winning wineries, sunbathing at volcanic rocks, spearfishing in caves, and dining at exceptional restaurants. One voter summed up the island as “astonishingly beautiful”.

Traces of Beer Detected in 9,000-Year-Old Vessels in China

Afghan man suspected of raping and killing girl, 13, in Austria arrested in UK

Daily Telegraph: An Ode to Naxos, the largest island of the Cyclades (video)