The mayor of Chania, Panagiotis Simandirakis, made public on Friday afternoon the letter sent by 2013 Mikis Theodorakis to the then mayor, Manolis Skoulakis, with the unique content of his contribution, in order to realize his wish to be buried in the cemetery of Galatas, that is, where his parents rest and his brother.

Mr. Simandirakis emphasized that his decision to publish the letter stems from his institutional obligation Municipality, to comply with what Mikis Theodorakis asked for.

In the letter, which was received with a confidential protocol, Mikis Theodorakis refers to the fact that his family is against his choice, but that it is his right to determine the place of his last residence.

Indicative of the will of the great Greek composer to be buried in his place of origin, is the fact that he had provided to ask, in case the Manolis Skoulakis would not be mayor when Mikis passed away, his wish to be realized by the current mayor, something that happened.

In his statements, Mr. Simandirakis underlined that he publishes the letter as it should and with all due respect to the family of Mikis Theodorakis.

In particular, Mr. Simandirakis stated: protocol on 5/2 / 600, which is addressed to the then Mayor, the late Manolis Skoulakis, by Mikis Theodorakis. This letter is published with absolute respect to the memory, the family and the relatives of the deceased and describes with absolute clarity the wish he had regarding the place of burial. I consider it an institutional and moral obligation, as Mayor of Chania, to honor Mikis's last wish “. 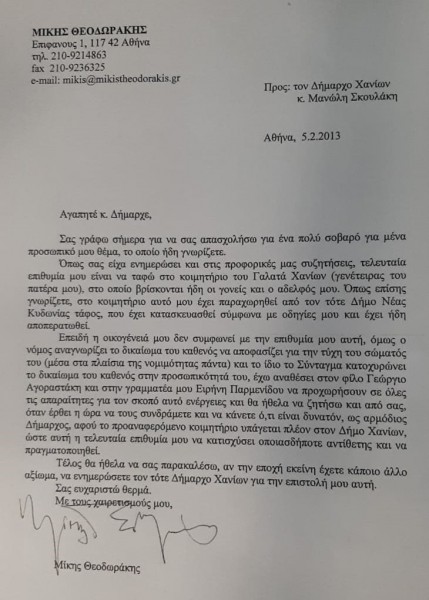 National Gallery: Why It Was Not Easy to Sell Stolen Paintings – Two Experts Explain

Bookshop in Athens reveals most popular books to read during lockdown 2.0