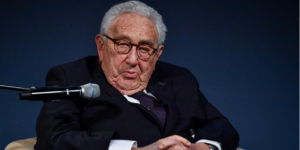 Namely, how Turkey is now more of a liability to Western security than it is an asset. Iraq, Syria, Armenia, Greece, and Cyprus all grapple with Turkish aggression. Turkey victimizes religious minorities at home and abroad. Ethnic cleansing continues. Despite it all, Western appeasement of Turkey also continues.

There are several reasons for this. Some diplomats believe in a Turkey that once was, rather than what Turkey today has become. Others believe punitive policies could allow Erdogan to play the nationalist card to bolster his reelection prospects. This is ignorant, however, because it presumes that someone as power-hungry as Erdogan would accept an unfavorable outcome at the ballot box. Still others are simply corrupt and hope to attach themselves to the Turkish gravy train.

That said, Turkey’s appeasement is not new. Former Secretary of State Henry Kissinger normalized it almost a half-century ago when he secretly backed Turkey’s invasion of Cyprus. The decisions he made then have greater consequences today than those surrounding the Vietnam War. While time overcame enmity in Southeast Asia, Kissinger’s decisions in the Eastern Mediterranean at best froze an otherwise resolvable crisis and at worst might spark renewed conflict.

Delphi Economic Forum – Mitsotakis: We need decisions by the end of May on energy (video) (Upd.)

Mitsotakis urges Greeks: Get vaccinated as soon as possible