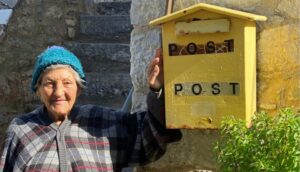 Cheerful and polite, with eyes filled with confidence, and a great sense of humour, she loves listening to jazz music, while cherishing her travel memories. But she almost never leaves her village and will vehemently defend it.

Time has clearly left its mark on her facial features while she conveys the wisdom of the old days. Ms Smaragda is the only resident of Anavatos: an almost deserted medieval village in central Chios. The village is also known as “Mystras of the Aegean” and was founded during the Byzantine era.

She has been living here for the past 30 years of her life, and, as she says, she is a “citizen of the world” who at one point decided to “settle down”.

The colourful flowers
“I travelled to France, Italy, and many more European countries. Then I settled down and came here,” she told us when we met with her on the eve of the Archangels celebrations, as she was decorating the church; after the Vespers, she would have guests over for a coffee.

Turkey annoyed by presence of Greek special forces at Evros

The Ionian Islands are among the safest regions in Europe

Enchanting video of Florina covered in snow is out of this world! (video-photos)