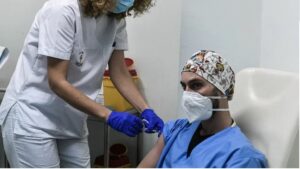 The Secretary-General of Coordination of the Greek Government, Thanassis Kontogeorgis, said the initial framework for the mandatory vaccination for specific professional groups would be laid out within the week.

Speaking to Proto ThemaMonday, Kontogeorgis focused on the course of the pandemic and the progress of vaccination in the country saying that announcements would be made based on the conclusion of the Bioethics Committee.

The Secretary-General noted that in the first phase it would concern employees in social care units and in the second phase the health staff of the country, pointing out that those refusing to get vaccinated in the specific groups would face penalties.

At the same time, Mr. Kontogeorgis referred to the opening of the platform for the vaccination of citizens under 18 years of age, referring to the relevant announcements that would be made in the afternoon by the National Vaccination Committee. He clarified that there was no talk of obligatory vaccinations for children to return to school from September.

As he said, in the last two weeks of June there were about 15,000 new appointments a day. In the age group from 18 to 29 years, the vaccinated now amounts to 30%, while in the ages over 60, the corresponding percentage reaches 80%.

A fascinating Museum of Riddles in Kastelorizo