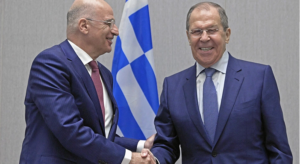 “I understand that Greece is a member of NATO, the EU. But we also see that Greece does not want to follow the path of worsening anti-Russian sanctions, Greece in principle does not feel satisfied with what is happening now between the West and the Russian Federation. We trust our Greek friends that with their wisdom they will make the choice that suits their beliefs”, said Russian Foreign Minister Sergei Lavrov when asked about recent reports by Kremlin spokesman Dmitry Peshkov on the transfer of equipment to Ukraine via of the base of Alexandroupolis.

According to the Russian minister, during the recent “very good” telephone conversation with the Greek Foreign Minister, Nikos Dendias, “yes, we raised the issue of the new steps taken in the Greek-American relations for the strengthening of the status of the port of Alexandroupolis and its purposes. US Navy and yes, of course, we read in what directions the Americans will use this port”.

Regarding the Minsk agreements, on which the diplomatic settlement of the crisis in Eastern Ukraine is based, as Lavrov pointed out during the first major press conference of the year, “there is a direct ban on the stay of foreign troops on Ukrainian territory. There is no ban on sending weapons to Ukraine”.

However, he noted that “first of all, there are many foreign soldiers there. They are not thousands, as some sometimes mistakenly say. But there are a few hundred Americans, British, etc. There is typically no ban on equipment. But going back to the thoughts of the current Ukrainian government, we understand, of course, very well that what the West is doing in terms of supplying this power with weapons creates an additional temptation for it to resort to military methods of resolving issues in the Eastern Ukraine. And this is completely unacceptable to us for understandable reasons. In fact, for the so-called military advisers who work there. When we draw attention to the issue, the West says that they are advisers, that they are not involved in hostilities. But I well remember the television picture during the war in Georgia in August 2008, when advisers in US military uniform, both white and African American, were actually advising on how to arm anti-tank and similar weapons. I would not like this to be repeated in Ukraine. Because this will be the crossing of all possible red lines, it will be a direct clash between the Russian citizens of Ukraine and the NATO military”, the Russian Foreign Minister commented.

“We have very old relations, historical roots, with our Greek colleagues, the Greek people, with Greece as a country. We remember Kapodistrias, who became the first governor of modern Greece, after his tenure in Russia, in fact on the front of foreign diplomacy. And very recently we had good conversations with Nikos Dendias. Of course, we discussed everything, both our bilateral relations and the prospects for the development of trade-economic, investment, cultural-humanitarian relations. These relations are indeed rich in all directions, including in the field of security”, Lavrov said.

The National Interest: The case for a strategic pivot to Greece & Cyprus

Mitsotakis to the cabinet: Increase of the minimum wage by 2%

PM Mitsotakis in NY: Greece 2.0 plan is made by Greeks for Greeks

Greece: Two fronts of bad weather in the coming week

Distress signal detected on isolated Tonga islands that are home to 105...

Palestinian residents facing eviction from disputed property climb on to roof and...

Fourth dose available for the immunosuppressed in Greece as of Thursday