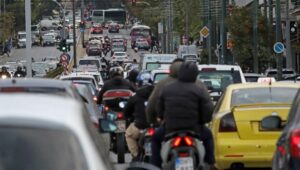 The 24-hour strike of workers in the means for public transport, including the metro, buses, electric railway, and trams have caused large traffic jams on the central roads of Athens and the Attica Basin.

The work stoppage will last until 21:00 for buses.

Both directions on Kifissos avenue are reminiscent of a … vast parking lot, while long delays are also reported in Kifissia, Alexandras, and Mesogeion avenues.

Traffic congestion is also reported on Kifissias Avenue, downstream to Athens, with vehicles forming queues, from Neo Psychiko to the height of Panormos.

Vehicles on Mesogeion Avenue are at a standstill forming liners of kilometres. The traffic extends from the height in Kontopefko to the junction of the avenue with Katehaki.

On Katehaki Avenue, drivers will encounter traffic on the upstream.

In the centre of Athens, now, Syggrou Avenue is seeing significant problems on the stream towards Athens, from Farmakidou to Petmeza.

There are delays in Vassileos Konstantinou, in the downstream, after the Hilton, while cars are also stagnant on Ardittos.

Concert at Cathedral of St. John marks the Bicentennial of the Greek Revolution