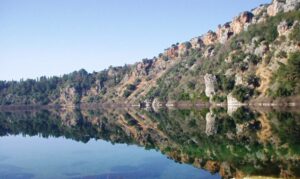 In the past, lake Ziros was one of the small travel secrets of Epirus, since only the locals and the visitors who had thoroughly explored the area knew about it: it’s very telling that until a few years ago, lake Ziros wasn’t even on tourist maps. But now it is better-known – mostly thanks to the internet – even though it still doesn’t get very crowded, preserving its unique, charming character.

Lake Ziros (or simply Ziros, as it’s also called by locals sometimes) belongs to the regional administration of Preveza, apart from a small part of the forest, and is considered a small lake, with a maximum length of 900m and a width of 600m, while its depth reaches 70m.

Lavrov: Russia’s objectives in Ukraine no longer limited to Donbas

Erdogan: We are not bound by the U.S Congress on the F-16s and Greek airspace

The name Ziros is a corruption of the Slavic word for lake, further proof of the presence of Slavic settlers in the area during the Middle Ages. The area has been inhabited by people for a very long time, already since Prehistoric times, when the lake was a cave (that collapsed) and around it, at a 1km radius, there were populations found at Kokkinopilos and Asprohalkos. Later, the creation of the lake with the rock formations around it became a local legend about two sisters – one nice and one mean – and an angel.

Crete is the most popular holiday destination for Brits

Athens is the top destination for Britons, survey shows

A “village” in the centre of Athens!