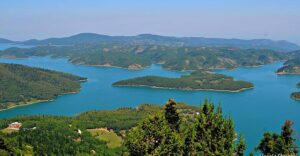 Nature has been bountifully generous to Greece, as the country boasts some breathtaking vistas ranging from its iconic blue seas to rugged mountainous ranges lush with green.

But Lake Plastiras, the artificial jewel of Thessaly is a testament to how humans can add beauty to the already astonishing landscape. Granted, it is surrounded by glorious natural beauty, yet, at the same time, it is a place created by human intervention, one of the rare cases where human activity contributes to the creation of a natural environment of unparalleled beauty.

It was formed in 1959 with the completion of the dam at its southern end, at the headwaters of the river Tavropos, also known as Megdovas. The idea for its construction belonged to Nikolaos Plastiras, who, from the moment he conceived the idea until his death, supported and promoted its construction with zeal. However, he passed away before he could see it.

The 220 m long dam held back the Tavropos waters, which covered the plateau of Nevropolis and created Lake Plastiras (Tavropou). The waters of the lake supply the hydroelectric power station of PPC SA (the leading company in the production and supply of electricity in Greece), irrigate the Thessalian plain and also supply water to the city of Karditsa along with 38 smaller towns and villages within the prefecture and the wider region of Thessaly.

Since the early 1980s, thousands of nature and folk culture lovers have explored the beauty and unique nature of the area. Numerous investments over the last decade have turned the lake area into a sought-after tourist destination and an attraction for thousands of visitors throughout the year. The northwest side of the lake offers by far the best view and is therefore more developed. More specifically, the villages of Neochori and Kalivia Pezoulas are the main tourist destinations of the area. The area is ideal for weekend excursions, but if you decide to stay longer, be sure to visit Meteora, which is about an hour away.