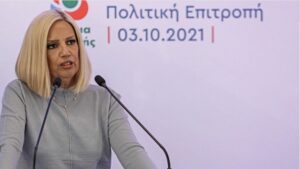 Fofi Gennimata, President of the KINAL party, was admitted to the “Evangelismos” hospital last night with symptoms of incomplete intestinal obstruction.

After extensive examinations, the hospital said in a statement, it was found that the condition was due to a recurrence of an underlying disease.

Mrs. Gennimata has been fighting cancer, while her health condition is also affecting the internal party race for the leadership of the Movement for Change, as the current leader of the faction withdrew her candidacy.

In communication with her close associates, Mrs. Gennimata appeared optimistic that she would win this battle as well.

Her colleagues running against her for the leadership of the party immediately contacted her to wish her a speedy recovery.

Mitsotakis: The night is threatening – The difficulties are ahead of us

Did Turkey sell the bones of slaughtered Greeks & Armenians for industrial use?

Erdogan on US sanctions: “Open attack on Turkey”