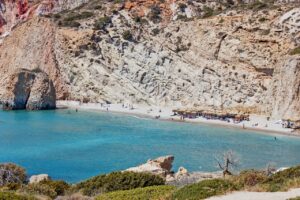 The rave reports about the Greek island of Milos from around the globe continued in the international media.

In more recent articles, Newsweek magazine ranks the beaches of Milos among the 30 most popular in the world, while the most special holiday magazine Conde Nast, in its special online edition for the Middle East, includes Klima in the most beautiful villages of Greece.

The London Times also makes reference to the island in an extensive feature on Greece, urging readers to visit the volcanic Milos, full of iridescent sea caves, and enjoy its hot springs.

Thanks to its volcanic origin, Milos boasts a magnificent colorful landscape and a coastline that counts more than 40 exotic beaches.

“The luminous Greek island of Milos has the best beaches in the Aegean, fascinating history, and superb seafood – and yet it is so often overlooked. All the better for the few who do go there, entirely alone in its turquoise bays”, reports Cntraveller.

HCAP: Tender Procedure (RfP) for the provision of expert services for the development of Kalamata Airport

Paros is one of the best destinations for honeymooners

American tourist paid 600 euros in Mykonos for a portion of crab!