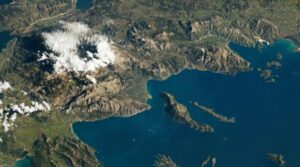 The US Space Agency (NASA) has released a space - of part of the coastline of Western Greece and some Ionian islands.

The -, released now, although taken last December by an American astronaut of the crew of the 64th mission to the International Space Station (ISS), shows the Akarnanian Mountains (with their tops covered by clouds), Lake Voulka the islands of Kastos, Kalamos, Meganisi and part of Lefkada.

Turkish Minister Cavusoglu provokes: We blocked the Greeks from entering our continental shelf

Turkish Minister Cavusoglu provokes: We blocked the Greeks from entering our continental shelf

ABTA: Greece among the five most popular destinations for 2021