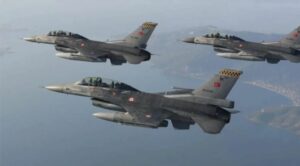 The Turkish Air Force carried out 41 violations of Greek national airspace on Tuesday, with two of the violations turning into a god fight with the Hellenic Air Force over the Aegean Sea.

In all, eight Turkish fighter jets (six F-16s and two F-4s), two unmanned UAVs, and a CN 235 spy flew over the Aegean today.

The 5 violations were committed by Turkish drones and the remaining 36 by fighter jets.

4 of the above violations were overflights. Specifically, two pairs of Turkish F-16 and F-4 aircraft flew at 12:03 over the island of Anthropofagoi and at 12:04 over Makronisi at 20,000 feet.

As reported by the Hellenic National Defence General Staff  (HNDGS), the Turkish aircraft also committed eight infringements of the air traffic rules at the Athens Fir.

Where is Kaliningrad – Russia’s exclave in Europe – and how will Lithuanian sanctions affect Western relations?

10,000 migrants have been deported from Greece, Immigration Minister says