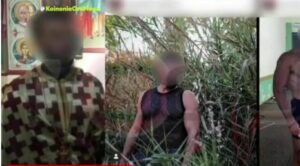 A priest from Serres has caused an uproar, after posting half-naked -s of himself on Instagram.

In the priest’s profile, there were dozens of -s of him in provocative poses, half-naked, with fishnet T-shirts and open shirts.

Speaking on a radio station in Thessaloniki, the priest claimed he did not believe he had done anything provocative, explaining that he posed as a model in order to help a member of his family who is a professional -grapher.

However, after the matter became public, the priest locked his profile, which is now only visible to his friends.

New coronavirus variant with ‘constellation’ of 32 mutations identified in Botswana

PM: This year, Woman’s Day is different and doubly important for Greece

Fetolia: the Art of Scarf

Ronn Moss: Beyond The Bold and the Beautiful

‘You see nothing, hear nothing, say nothing’: Ghislaine Maxwell’s ‘handbook’ revealed in...

Ireland brings in new restrictions ahead of Christmas due to ‘very stark’...

Greece clinches top award as the best global destination for the US...