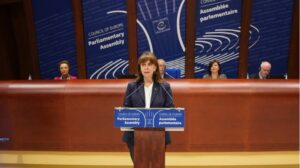 The President of the Hellenic  Republic, Katerina Sakellaropoulou sent a firm message to Turkey during her speech at the Council of Europe when a Turkish MP falsely claimed that Greece has not recognised the International Court of Justice in The Hague.

“We have done it since 1994, in contrast to Turkey, which does not recognize its jurisdiction” replied the President of the Republic.
On the issue of the war in Ukraine, Sakellaropolou said the Russian attack was not just territorial or geostrategic aggression. “It indicates the direct and full-fledged challenge to liberal democracy and European values.”

“Russia’s provocative and abominable war in Ukraine reminds us of the illegal invasion of Turkey by Cyprus 48 years ago,” Katerina Sakellaropoulou said.

In her speech, the President of the Republic also referred to the rise in immigration, saying that Greece has borne a disproportionate burden in a field that has brought to the surface disagreements and underlying conflicts between the Member States. This issue is not subject to political instrumentalisation but, on the contrary, requires a common stance,” said Ms. Sakellaropoulou.

The President of the Republic did not fail to send strong messages to Turkey, noting that the country has never accepted the jurisdiction of the International Court of Justice in The Hague. Ms. Sakellaropoulou’s answer came after the provocative reports of a Turkish MP who said in his speech that it is contradictory for Greece to ask to go to The Hague while it does not recognise the international court.

Prespa Agreement: Athens suspends the ratification of the cooperation memoranda with Skopje

PM Mitsotakis to Tsipras: “I am tempted to call elections just to see the panic in your eyes” (video)